You are invited to travel with Te Deum to 16th-century Rome and experience a Renaissance era service of the Sistine Chapel, the Pope’s private space for prayer and worship. Featuring Palestrina’s beloved Pope Marcellus Mass, motets of Josquin des Prez, and Gregorian chant.

Tickets for January 23 are available directly from Grace Episcopal Church. 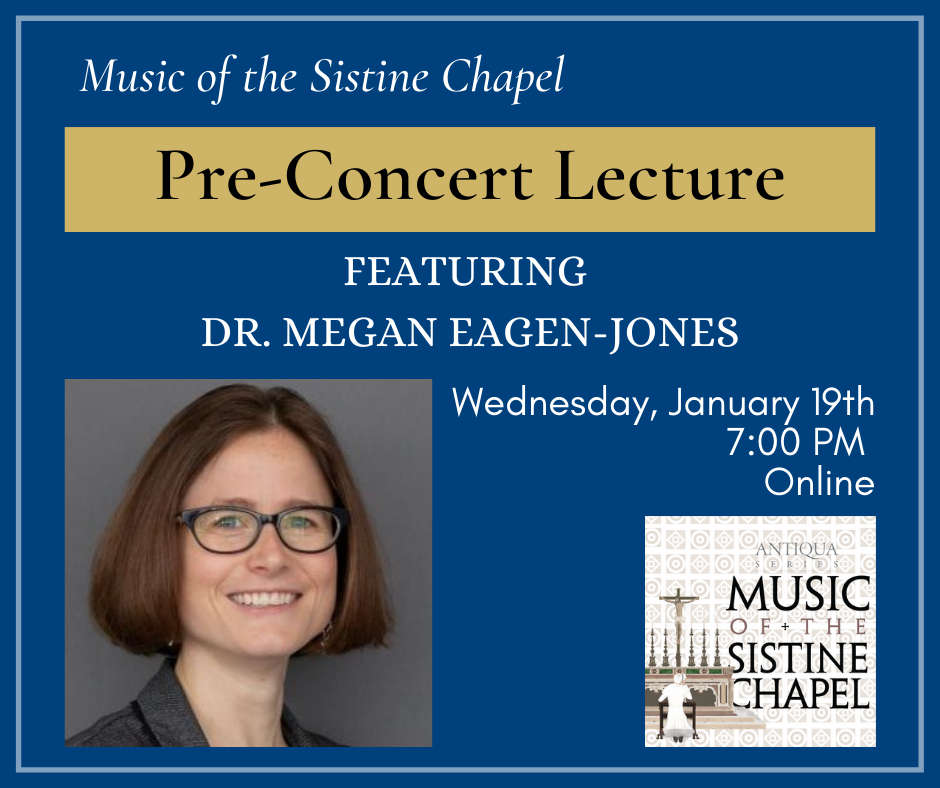 Anyone who purchases an online ticket to Music of the Sistine Chapel will gain access to a virtual pre-concert lecture featuring Dr. Megan Eagen-Jones from the University of Illinois. This lecture will guide patrons through the works on this early music program and their impact on the history of sacred music.

The Zoom link to join the live lecture will be provided in your ticket confirmation. The session will be recorded and available for viewing to all Antiqua patrons through January 26th.

Megan K. Eagen-Jones earned a PhD in Musicology from the University of North Carolina at Chapel Hill (UNC-CH) in 2016. They hold an MA in Musicology (UNC-CH); an MA in Humanities (University of Chicago); a BM in Composition, and a BS in Physics and Astronomy (both: Iowa State University). Among other grants and awards, Eagen-Jones won three DAAD scholarships, including a full-year DAAD Fellowship for study in Augsburg, Germany from 2013 to 2014.

Eagen-Jones joined the faculty at the University of Illinois at Urbana-Champaign in 2018 as a Visiting Assistant Professor. To date, sixteen of their courses have earned an “Excellent” ranking from the university for quality and effectiveness. Before teaching at UIUC, they held positions at East Carolina University (2016–2017) and UNC-CH (2017–2018).

Eagen-Jones is a specialist in early modern choral repertoire of the 15th and 16th centuries. Their article, “Saints, Heretics and Humanist Poets,” which explores musical settings of prominent exegetical texts, is forthcoming with Allitera Verlag (2022). Their current research is geared toward inclusive curricula design and explores strategies for renegotiating power in the classroom. Other current projects include a critical edition of Erasmus Rotenbucher’s Berckreyen—a collection of mid-16th century bicinia.