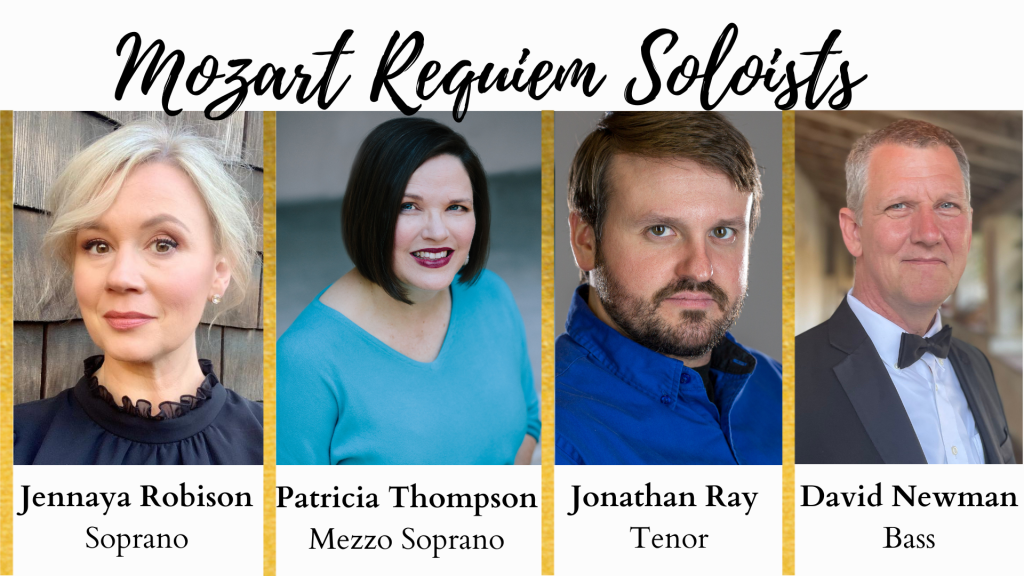 We are honored to feature four (4) renowned soloists at Te Deum’s upcoming Mozart Requiem performances. These individuals will be joining the Te Deum singers and Chamber Orchestra for the September 17th and 18th performances of this masterpiece work.

Learn more about these distinguished musicians below.

Jennaya Robison, Soprano
Dr. Jennaya Robison is the Raymond R. Neevel/Missouri Professor in Choral Music and Director of Choral Studies in the Conservatory at the University of Missouri-Kansas City where she conducts the Conservatory Singers and leads the graduate program in choral conducting. She is in demand as a conductor, clinician, and soprano throughout the United States. Most recent projects include Vaughan Williams “Dona Nobis Pacem” with Grammy-nominated True Concord Voices and Orchestra (Tucson, Arizona) where additional collaboration as soloist include Brahms “Ein Deutsches Requiem” and Mozart “Requiem.” An avid performer of oratorio and concert works, additional engagements have included Rossini “Stabat Mater”, Barber “Knoxville: Summer of 1915”, and the Rifkin edition of the Mass in b minor by J.S. Bach where her performance with Steven Moeckel, concertmaster for the Phoenix Symphony, was heralded with “brilliant coloratura” by the Tucson Daily Star.

Patricia Thompson, Mezzo Soprano
Patricia Thompson has been a soloist with many Bach Societies around the USA; she often performs on the Hale Library Concert Series programming music from Gesualdo to Argento. Patricia was a member of the Dale Warland Singers, and soloist on the award-winning recordings Cathedral Classics and December Stillness. Patricia is a founding member of Luminous Voices, Calgary’s professional choir (Canada), and soloist on several of their recordings, including Copland’s In the Beginning, and Schubert’s Ständchen, which won Choral Canada’s Album of the Year for 2016. In 2020 Luminous Voices’ recording Sea Dreams was nominated for a Juno Award. Patricia is also a member of the Spire Chamber Ensemble of Kansas City, bringing in musicians from around the USA. She is the featured “girl singer” with the Thundering Cats Big Band and self-published a jazz album It’s Only Natural. Her voice has been described as “like pouring the smoothest cream over a chocolate praline…”  Patricia holds Voice Performance degrees from St. Olaf College (BM) and the Indiana University Jacobs School of Music (MM and DM).  She is an Associate Professor of Music (Voice) at Kansas State University, Manhattan, KS.

David Newman, Bass
Noted by The Philadelphia Inquirer for his “eloquent, emotional singing,” David Newman has enjoyed long associations with The Four Nations Ensemble, Carmel Bach Festival and the Bach Choir of Bethlehem. He performed with Opera Lafayette at Versailles, Lincoln Center and The Kennedy Center, a French residency of Medieval music with Aziman, Messiah with Tafelmusik in Toronto and with Masterwork Chorale at Carnegie Hall. Other career highlights include The Spoleto Festival, Honolulu Symphony, Philadelphia Orchestra, and The Russian National Orchestra. He has recorded for the Philips, Dorian, Analekta, K617 and Naxos labels. Mr. Newman teaches voice and music theory at James Madison University.