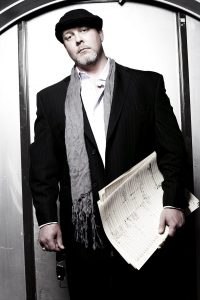 Te Deum is thrilled that James Eakin is servicing his third season as the Composer-in-Residence. Eakin is one of the busiest and most sought-after composers in America today.

Eakin’s music catalog is prolific and spans genres from Concert Hall to Pop/Rock. He has composed works for Maya Angelou’s 80th Birthday celebration, the President’s Christmas Gala at the White House, and the Aspen Music Festival to name a few. James’ hour-long “Flowers over the Graves of War” for Chorus, Soloists, and Orchestra premiered to a sold-out audience at Carnegie Hall and most recently, his “#twitterlieder: 15 tweets in 3 acts,” premiered by the San Francisco Gay Men’s Chorus at Davies Symphony Hall, has taken the choral world by storm.

Our audiences will have the pleasure of experiencing James’ third composition for Te Deum. The primary benefit of a Composer-in-Residence, rather than a single commissioning project, is the special connection that happens musically between composer and choir when a relationship is built. James had had the opportunity to get to know Te Deum and our singers, understanding our music-making on an intimate level. This more in-depth knowledge allows him to compose pieces specifically designed to maximize Te Deum’s skills and performance qualities.

Te Deum’s July 2020 project, the virtual choir performance of “Great Flowing River,” was composed and edited by James. The video was viewed more than 10,000 times on YouTube and Facebook in the first two weeks of the project’s release.

James was born and raised in Shreveport, Louisiana.  From an early age, he was drawn to his native blues and jazz as well as classical and film music, playing everything he heard by ear on the piano and experimenting with his own compositions. It wasn’t until years later that he began formal music studies.

He earned a Bachelor of Music from Centenary College (2000), a Master of Music from Southern Methodist University (2003), and in 2007, received a Doctorate of Musical Arts in Music Composition at the Conservatory of Music, University of Missouri-Kansas City.  James has had the privilege of studying with some of music’s most prominent composers: John Corigliano, Jeff Rona, Jack Smalley, George Tsontakis, Bruce Broughton, Zhou Long, and Chen Yi.